Triathlon and I lived to talk about it!

This is the first of three posts about the triathlon. This post is about the logistics of the actual race, the next two posts will be about the emotional stuff connected to the race. (this will be the most boring one, I promise!)

The morning started lousy. Having inadvertently set my alarm for 4:45 pm instead of am, my eyes popped open at 5:11, exactly 4 minutes before my running buddy "C" was to pick me up (we were meeting "M" there because she had a booth in a festival that she had to go to immediately after--crazy woman!). In a panic, I scurried around trying to get ready. Do you have any idea how many things you have take with you for a triathlon? Water bottles (lots of them), biking shoes, sunglasses, helmet, biking gloves (these are absolutely crucial!), two towels, Gu (which wasn't as nasty as I thought it would be), power blocks, your triathlon packet, swim goggles, the bike, a shirt to throw over the suit after the swim ... you get the idea, there's lot's of stuff. I threw it all into a bag along with clippies, hair elastics, brush, a yogurt smoothie and string cheese, (because you have to, have to, have to eat something and I obviously had no time to eat at home!). I threw on my suit, socks and shoes and ran to the door to see if "C" was there. Thankfully, she wasn't yet, so I actually had time to go put on deodorant and take care of other, um, personal needs (I know, TMI).

Food and hair were taken care of in the car and soon we were walking our bikes and all our stuff up to the club house, having parked blocks away. As you walk in, you have to give your race number and someone writes it on both of your arms with a sharpie. Then they write your age on your calf. "C" said, "Let's go to Cathy, a friend who was volunteering." So Cathy wrote on me. She learned it was my first triathlon and asked if I wanted smiley faces. "You, bet!" I told her. Later, I had a woman ask me, "Hey, how come you got smiley faces and I didn't?" I told her that when you're with "C", you get perks, which is true, she seems to know everyone and they all love her (who could help it!?) 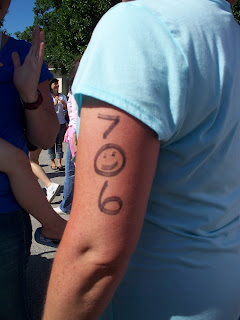 My number and smiley face! 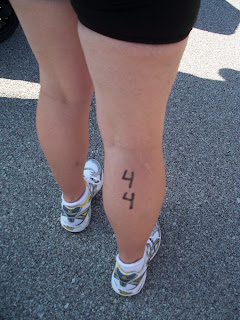 Yup! I'm 44!
We set up our transition area, got our computer chips (they looked like a Velcro watch kind of thing that you put on your ankle) and then went down to the water to wait for the race to begin. The temperature was AMAZING for August in the Midwest, so amazing that we were freezing until we got into the water. I stayed at the back of the pack as we headed off ("C" says there's less chance of being kicked and clawed in the back), and, since I'm an incredibly slow swimmer, that's exactly where I stayed. A quarter mile looks sooo much farther when you're in the water than when your standing on the beach! But, I just kept moving my arms and legs and eventually made it out of the water. 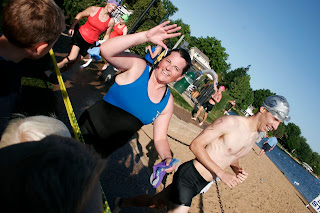 Waving to my family after the swim.
Next it was time for transition to biking. I toweled off, drank/ate (I don't know which to call it) the Gu, followed by LOTS of water, put on my shirt, socks, shoes, helmet, biking gloves, forgot my sunglasses, and headed on out. The bike was just as I practiced it, but maybe a smidge easier because of the adrenaline of race day. Nothing unusual happened and, twelve miles later, the transition to running went smoothly. 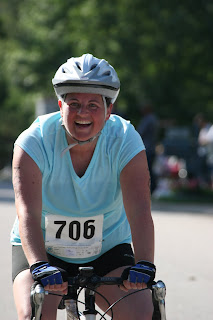 The end of biking
Running was the event that I had become stressed over. You see, my killer work-out class instructor had advised me to only give 60% on the swim, 80% on the bike, and 100% on the run. To me, this meant running the whole thing, no walking. But, two weeks ago, when we biked and ran the course, I was absolutely shocked by how hard it was to keep running after the bike ride, even though I'd combined biking and running into single workouts multiple times. I simply didn't have it in me to run the whole thing, so we walked up the hills and ran down them. I was grateful that I learned this before race day, knowing that it would have been defeating to learn I couldn't run the whole thing the day of the race.
I was fully prepared to run as much as I could and walk when I had to, but, since this was the run (100% remember?) I was determined to give it all I had and see how far I could make it before I had to walk. (Have I mentioned that I live in a VERY hilly place? There's no such thing as flat around here).
The run was easier than two weeks previous, maybe adrenaline again, who knows, but I was more than 3/4's the way and was sure I had one more tough hill to conquer and knew I wouldn't be able to run up the whole thing when I turned a corner and saw the finish line!!! The last tough hill was already behind me and I ran the whole thing!! What a happy moment!!!
I finished strong and didn't care what my time was (in fact, I never checked and since they haven't posted the times on-line yet, I still don't know how long it took me). I was just so thrilled to have crossed the finish line in one piece!!! No bleeding by the side of the road with a mangled bike, no drowning, no tripping and biffing it on the run! Just the toughest/longest work-out I'd ever done and it was behind me!!! 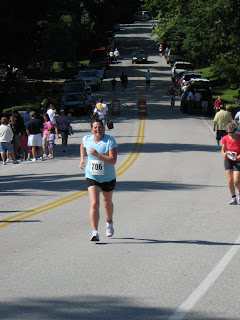 Me running up to the finish line.
Imagine my surprise when, "C" and "M" went to check on their standing, came back, and told me that "C" came in third (she didn't even have time to really train and she comes in third!), "M" came in fourth (she cut 30 minutes of last years' time!), and I came in fifth!!!! Admittedly, we were in the fat-girl division (they call it Athena's!--funny!), but still! I was third to the last one out of the water. We had the purple swim caps and there were only two after me, so I was SHOCKED that I came in fifth!!! "C" repeatedly told me that it's not about the swim, don't sweat the swim, and I guess this proves it. I was simply concentrating on getting from point A to point B, and had no idea that I had passed anyone in my division!! It was quite a happy moment. 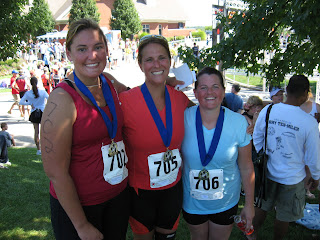 "M" (4th place), "C" (3rd place), and me (5th place)
The triathlon was exhilarating, I felt like I had climbed Mt. Everest. I think I may be hooked!!! Last night my husband looked at me and said, "I'm going to have to buy you a bike, aren't I?" I just gave him a big smile and he started calculating the cost. "C", "M" and I are already looking for another triathlon. We're all trained up, it seems a shame not to do one more this season!
Posted by Happy Mom at 4:34 PM

This is what I've written

They read what I write

I love reading what they write